With my interest into Tarot - and the design of it - it might not be surprising I had to have the Bright Idea Deck by Mark McElroy. It's very much like a Tarot deck, only very much more "usable" for normal, un-enlightened people. It's symbology is straightforward and depicts scenes from everyday life. No mythology or arcane symbolism. At least not such that can't be understood directly without a major in the occult. And given my dabblings in using Tinderbox for Tarot use, it was only natural I tried out various spreads and how to record the readings in Tinderbox.

My first such experiment went rather finely - at least the Tinderbox part. This spread is taken from Mark's book "Putting the Tarot to Work", and I found it fairly difficult to read. In contrast with many spreads this one does not reflect the inner attitudes and positions, but it asks for the perceptions of others - of the environment. I titled this reading "How others see me" as that paraphrases it well. Obviously it is hard to focus on how others might percieve oneself, and not one wants to be percieved or how one fears to be percieved. Here's my Tinderbox map of the result: 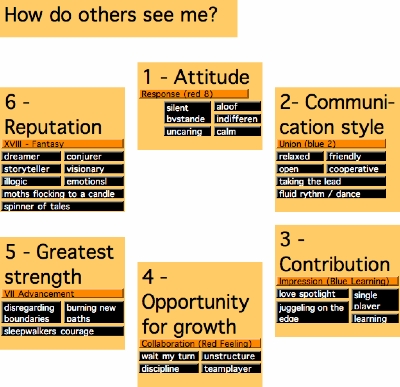 I arranged sticky adornments with the title of the various positions in the spread. Each position answers a specific kind of perception like "How do others percieve my contribution/work?" (card 3)

I then drew each card in turn and added a note with it's name as title ontop of the adornment. Up to here this would be all that is necessary to "record" the spread. With this info I could go back later and look up the cards and their meanings.

But I didn't stop there. I now added keywords that sprang to my mind while interpreting the card. Some came from the imagery< of the card itself, some from the textual meaning in the book, some were free assosciations I had right then and there. All these things are very mportant for a reading. The same card might trigger some very different assosciations at another time and situation. So recording them is important.

As to the actual reading, Tarot has a way of somehow never really surprising me - which I find rather surprising. The card I draw always seem to very appropriate. And I know there a a score of cards in the deck that would NOT be appropriate to me in that situations.

People who know me might enjoy actually checking on what I came up - I would be very interested to hear if anybodys view of me differs from this reading!